What's in the food we eat? 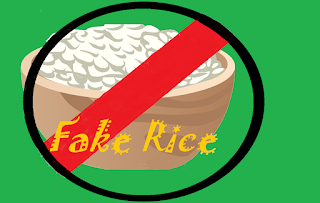 I read some scary news this past week that left me feeling even more determined to learn how to grow my own food. At least some of it anyway. What boosted my determination this past week was hearing about fake rice. So naturally, I did a search online to see if there was more information to back up what I had read and there it was. The information I found came from Viet Nam so I'm not sure if any fake rice has ever made it to America, still food wise, I had never even consider the possibility of counterfeit rice. The scary part was that the fake rice was made of plastic and equal to no nutritional value.

Now I can honestly say I wasn't planning on growing rice but damn! Maybe I should. Anyway, after digesting what I was able to learn about the fake version of this food I also read that there was a way to identify the fake rice from the real rice; that made me feel a little better. Real rice has a tendency to settle to the bottom when placed in water, the fake rice floats and doesn't sink. Fake rice also smells and burns like plastic, but I do not recommend the burning method to testing. From what I could see the fake rice was always mixed with the real rice so that people got the same package of rice with only half the actual rice, I guess.

I really want to think that this kind of thing only happens in other countries and I have yet to read or see anything that suggests that fake food item can be found here in this country where I learned a few years ago some people in Europe were told they had been eating horse meat, sold as regular beef. With regard to the fake rice  I did do my best to see if I could identify the label on the package in the video I saw to see if I ever run into any plastic rice on my grocery shelf, something that would be highly unlikely, just the ideas, however, will keep me checking the rice I buy from now on.

I mention all this as a point of interest and not as an alarm. I'll save the alarm until I find out for sure plastic rice is being sold in the United States. I can't see imported food being subject to the same scrutiny as the food grown here so I imagine if there ever is any problem with food, that food will have come from another country. Meantime not in addition to sharing advice about growing veggies and fruits don't be surprised if I also end up sharing rice planting information.