I recently planted and began growing my own herb garden to try and generate the same herbs I now use in powdered form and to grow my own onion, garlic, and peppers used mostly in the dishes I cook. One of my goals is to try and see if I can, eventually, create my own powdered ginger, turmeric, and cinnamon. I’m not growing the cinnamon but I do intend to try grinding up some cinnamon bark from the raw cinnamon I usually have access to when cooking and baking.

Starting my little herb garden was actually easier than I thought it would be, I decided not to go with planting a plot of land (cause I really don’t have that much land available for planting). Instead, I decided to grow all my herbs in flower pots, outside. I started by picking up some seeds and plant starter trays that look like and egg carton without the top on it. I planted the seeds for peppers, and eggplant and waited a few weeks for them to sprout.

After that, I nourished the sprouts until the tiny plants outgrew their miniature confines before moving them into fresh potting soil inside large plastic drinking cups. Next stop, for the baby plants, is into their perspective flower pots. I'm still at this point not sure how many plants to have in one pot. Where my growing experiment stands now is I have several large flower pots with healthy looking pepper, and eggplants growing in them and getting bigger each day. The peppers I am growing are more for cooking with and not the very hot kind of peppers, not yet anyway, that will be my next planting experiment.

Peppers contain a chemical called capsaicin and the more of that chemical there is the hotter the pepper. Right now I am operating near the bottom of the capsaicin scale for safety purposes. Another reason for my growing peppers is that I read about the healing properties of peppers when it comes to the stomach. Something I would not have considered since my thinking would have been if you're having stomach problems avoid hot peppers, especially cayenne peppers.

If you're not already aware of the fantastic healing powers of peppers take a look at the cayenne pepper link just above, you'll be amazed, I know I was. Tomorrow when the sun comes up I'll take some picture of my small tabletop farm to share.
Posted by All that Zazz Blog at 12:08 AM No comments: 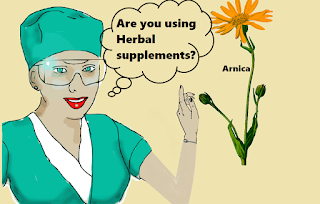 It might come as no surprise that part of your pre-surgery questions from your doctor usually include questions like; what over-the-counter-supplements are you taking? In an attempt to take into account any possible over the counter medicine interaction with any standard, after surgery prescription remedy your doctor might be considering giving to you. Herb supplements you might be taking could have an effect on your surgery outcome, especially when it comes to post surgery bleeding.

Herbs that thin the blood could potentially introduce a complication when suddenly the good effects of the herbal supplement, for a healthy person, change to a serious side effect for someone about to have, or fresh out of surgery. Things like Ginkgo biloba, Garlic, and Feverfew should be on the list of things you want to inform your doctor about if you are using them. So if it’s not on your pre-surgery list of supplemental concerns about over the counter supplements, don’t forget about the herbal kind of supplement. Some of the herbs you might be using could be worth mentioning in a pre-surgery meeting.

The above could also be a concern when it comes to cardiovascular health because some herbs can present potential side effects that might cause or contribute to post-operative heart palpitations, or hypertension. Doctors are aware of the fact that the effect of prescribing Lidocaine and midazolam could be intensified by herbs like Echinacea, and Goldenseal, so just in case you find out in pre-surgery meeting your doctor intends to give you Lidocaine, or Midazolam you can request more information if you are also using either of the above mentioned herbal supplements. Should you ever need emergency surgery It’s not a bad idea to carry in your personal health records a list of all the drugs or herbal supplements you are using so that doctor can take proper precaution if Echinacea and Goldenseal are part of your herbal supplement routine.

Discontinuing supplement use a couple weeks before surgery might be something you want to think about; along with sharing the list of every drug and supplement you use, with your doctor ahead of your surgery. After surgery you might want to wait until you get the all clear from your doctor before you go back to your supplement or over the counter drug use.

Herbs like Arnica and Bromelain in some cases have been shown to reduce pain, and inflammation your doctor can tell you if either of these two herbs will make a good substitute for post surgery prescription pain medicine.

Being mindful of and treating your herbal supplements with the same importance as any over-the counter drugs, when it comes to surgery, could prove helpful since even laser surgery can carry some risks for people who take Dong quai, for menopause or menstrual cycle, or St. John’s wort for anxiety or depression. Sharing your concerns and your list of supplements or other non-prescription drug use with your doctor ahead of time should all lead to a healthy happy surgery out-come.

There is another group of herbs that come in handy especially after surgery and they are of the flowering kind. Flowers do helping people recover faster after surgery; and while they may not completely understand why those in the art of plant therapy know that flowers, and other living plants, can lower heart rate, reducing blood pressure and stress in general; further reducing the need for pain medicine.
Posted by All that Zazz Blog at 2:12 AM No comments:

Email ThisBlogThis!Share to TwitterShare to FacebookShare to Pinterest
Labels: Surgery and Herbal Supplements 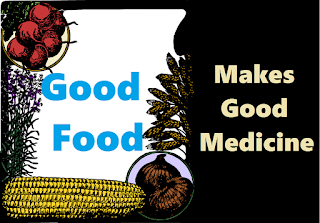 Welcome to my first blog post for the Food Medicine blog, I actually started collecting information about food and all of its medical qualities on my Pinterest board, Food Medicine. Since that time I have been amazed at the genuine interest in holistic medicine from people, some taking over-the-counter medicines, and others vowing never to take any kind of prescription or over-the-counter medicine. In my life I have seen proof of the value of both kinds of medicines the natural, and not so natural, or Pharmaceutical.

It occurred to me while watching an episode of the television program the Monster Inside Me, a television program that highlights cases of parasites, viruses, and other nasty alien organisms that take up residence in our bodies and reek-havoc sometime effecting our immune system, causing paralysis  even death, in some cases.   My interest was aroused also because I realized they were not talking about afflictions happening in far-away-lands, even though several of the people featured who did make contract with their ailment while traveling outside the country, bringing them home with them. The real eye opener for me was that these kinks of infections, ailments, and body invasions were going on right here (in the U.S.) right now!

In trying to understand just how and why parasitic warms, or brain-eating-ameba, could happen right here in this country with all of our medical advancement we have, and trying to make sure my travels never ended the way so many of the people featured on that show did. So I started looking for information about the cures for many of the parasitic body snatching invaders. The doctors on the television show were able to diagnose then treat the patient with just the right medicine to eradicate the infecting invader, in most cases before the body invader could do any serious damage to its host.

What really got my attention during the reading I was doing on the subject of parasitic invasion was the effect natural foods, herbs had, not only controlling but curing many of the patients who were living with parasites inside them. That was when my drive began to learn what living with the right kinds of herbs as part of a healthy diet could do to prevent a person from becoming infected by parasites. I think I should say here that with regard to most of the good news I have come to know about herbs my parasite obsession is one of the extreme concerns that I have.

The majority of my concerns and interest all revolve around how to live a healthier life with herbs and other natural foods. So just in case you were wondering the latter, living healthier with herbs, is what this blog is all about, and not so much parasites. A good diet can not only control parasites but eliminate them so diet and how to incorporate healthy foods in to your body is my true driving force behind this blog.

To me there is nothing like the taste of fresh food, but I was surprise to find out when my kids were younger, and I put the question to them, “do you know where milk comes from,” they smiled and said,

“Sure; it comes from the store.”

I realized that for a lot of kids, and grown-ups too, fresh food nowadays simply means something from the grocery store; not that grocery stores don’t really present fresh food, because I actually have proof that they do, but my idea of fresh food was food grown, and harvested to eat. I realize that growing your own food is something you can really no long do in most area and to be perfectly honest nor would I want to, but that should stop me or anybody from eating healthy.

I also realized after reading something sent to by a friend over the internet that my children weren’t the only ones with an unclear picture of where fresh food came from. In the article sent to me by a friend a young lady was berating a hunter for killing an animal that he planned to eat. She shouted in capital letters, how cruel it was for hunters to kill innocent animals for food, ending her rant with “why don’t you just buy your meat from the butcher at the grocery store where no animals are actually harmed!”

Faye's Kitchen
Posted by All that Zazz Blog at 1:53 PM No comments: