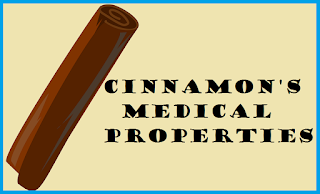 Cinnamon has been part of my diet since I can remember, from cinnamon suckers

to cinnamon rolls the word cinnamon has always been related to a flavor I enjoy. Not until recently, however, I have given any attention to the health benefits of cinnamon. One of the things I enjoy is reading about different food medicine benefits like this, finding some way to put them to the test, then sharing the results be they, positive, or negative. Since I started using cinnamon for its health benefits I have noticed a drop in my blood pressure since I started using my cinnamon and honey concoction, a fact that even presented some surprise to my doctor during a most recent physical exam.

As I mentioned I have always enjoyed the taste of cinnamon and now I seem to be enjoying a health-related positive effect of cinnamon too. Personal discoveries by me lately with regard to the medicinal use of cinnamon has me singing the praises of this really neat food medicine. To me, cinnamon is the perfect combination of something that tastes good and is good for you. Cinnamon suckers may be stretching the good-for-you thing a little bit and maybe the cinnamon roll but cinnamon tea, along with cinnamon and honey are some of the ways I have added cinnamon to my diet. I've also gained an entirely different appreciation for the cinnamon I find in cookies, cake, apple pie, apple turnovers or my morning oatmeal.

I also realize that not everyone may enjoy the taste of cinnamon but my hope is that after reading this even a cinnamon hater will be at least willing to try cinnamon for some of the really neat medical properties this famous tree bark possess. If I had a planter big enough, you can bet I would be trying to grow me some cinnamon too because in my opinion cinnamon is one of the best food medicines a person can add to their diet, and while I have not yet had the pleasure of experiencing the pain relieving properties of ground cinnamon some studies have shown that cinnamon is a better pain reliever than Ibuprofen.

I also wanted to take this opportunity to point out this word of caution, some of the herbal medicine publications I read caution to be careful where herbal and pharmaceutical medicines meet. Therefore I will echo this same caution. If you are taking a doctor prescribed medication, you might want to check with your doctor, to see if taking a herbal medication on a regular basis would be considered safe to use with your doctor prescribed meds. There are several Herbal PDR online that should be helpful understanding the different effects some herbs might have on you.

The use of cinnamon has shown positive results and worked well against neurodegenerative diseases like Parkinson's, Alzheimer's, meningitis, brain tumors, and multiple sclerosis. Cinnamon

can help balance hormones which can aid fertility for couples who might be experiencing difficulty starting or add to their family.  Cinnamon also contains many of the nutrients the human body needs on a daily basis like manganese, iron, calcium and fiber, cinnamon may even reduce the proliferation of cancer cells.

Until now I never really looked at this natural ingredient for all of its wonderful healing properties, a natural medicine that taste good in my opinion. I know I will not be able to grow all of the herbs, fruits, and veggies that I want or need in my small garden but because of cinnamon's ability to act as a natural food preservative,  reduce the pain of arthritis, and menstrual cramps, take on bad cholesterol, and regulate blood sugar, cinnamon will definitely be part of my kitchen medicine cabinet from now on.

Email ThisBlogThis!Share to TwitterShare to FacebookShare to Pinterest
Labels: herbal