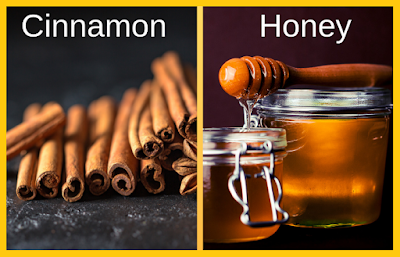 There is a magic that happens when you mix and boil Cinnamon and Honey together. Cinnamon falls in the sweet spice family of herbs. I have heard that cinnamon is good for improving your sleep, and weight loss but I use it mostly on my oatmeal and as part of my flu and cold elixir I usually put together in the cold and flu season. Honey contains high amounts of vitamins and minerals that can vary slightly depending on the flowers the bees forage but overall it is hard to beat the anti-fungal and anti-bacterial qualities found in pure natural honey.

Mixing the two together creates, in my opinion, a superfood that can be useful for a list of health problems. For someone, looking for help controlling cholesterol levels the mixture of boiled cinnamon and honey can, in about two hours lower high cholesterol levels as much a 10%.  This may sound funny and, I have yet to give this a try, but the mixture of cinnamon and honey on pasta, eaten on bread in place of jelly at breakfast is said to decrease cholesterol in the arteries and protect against heart attack.

Consuming the cinnamon and honey mixture on a regular basis can protect you from organisms like viruses and bacteria strengthens your body's resistance to these organisms by bulletproofing your immune system. Cinnamon mixed with honey can even provide reinforcement when your body is a war with a cold. A quarter tablespoon of cinnamon and one teaspoon of honey taken three days in a row will go a long way in helping you fight off that cold. Honey, doctors have discovered, contains an ingredient that can remove flu bacteria and viruses, how cool is that?

When it comes to your skin and acne a mixture of cinnamon and honey applied to your face before bedtime, and rinsed off in the morning can help reduce the inflammation that causes acne. The mixture of cinnamon and honey, with olive-oil added, can be used to prevent hair loss. Mix one tablespoon olive oil, one tablespoon honey, and one teaspoon cinnamon applies to your scalp for at least 15 minutes then rinse.

Where we all fall in the list of cures and treatments the combination of cinnamon and honey can provide is beyond me and my abilities to know. My hope is that by spreading health-related information like this we can all get a clearer picture of just how useful these health tips can be and figure out when and where to apply them. So far I have enjoyed success with just about every health tips I have followed and where necessary I have checked with my doctor when thinking about replacing an over-the-counter medicine with a herbal, or more holistic one.

It's not that I don't trust all of the health tips I read across, I just like to balance some of my non-medical knowledge decision-making with some true medical opinion, and I love sharing the health tips I have tried and that have worked for me. I have made a small batch (two small jars) of the cinnamon and honey mix and I'm just finishing my first week of using it each morning in tea. You can bet if  I develop any superpowers that fact will appear in a post.
Posted by All that Zazz Blog at 2:41 AM