Growing your own Food 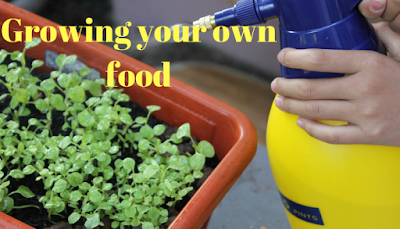 Some Reasons To Grow Your Own Fruit and Vegetables

Not long ago I decided to join people returning to the old tradition of growing their own produce. Now based on the acres necessary and the suburban area I find myself living in I could never hope to accomplish what my southern relative once was able to do, namely, self-sufficiently producing all their own fruit and vegetables, even preserving some of their fruit crop with the process called canning so that even out of season fruits could sometime still be had. I decided to restrict my indoor/outdoor farming to a small mobile herb patch land. I plan to maintain an herb garden so that I can also enjoy certain herbs, all year round. Why is growing our own food becoming popular again, and why should you start your own food garden? Well here are a few things to think about.

It's sometimes hard to believe that having your own vegetable patch or fruit garden was once commonplace but fell out of favor as the food industry grew more commercial and supermarkets began to take charge. More recently, however, more and more people (myself included) have started to explore growing their own produce again. So the following are some reasons why you might want to join us and even think about starting your own kitchen garden.

You can't beat the freshness

To me, fruits and vegetables always taste better when eaten as soon as possible after picking. You can't beat the freshness or all of the health benefits that come from fresh fruit. The fruit from supermarkets is often picked well before it is properly ripe, to extend shelf life, and this usually has an impact on flavor. Growing your own fruits and veggies lets you taste the freshest possible produce as it's meant to taste.

You can't beat the Quality

Commercially grown crops are often selected for their uniform appearance and high yields rather than for quality and taste. Growing your own produce lets you concentrate on the quality rather than the economic quantity.

What about the price?

A lot of supermarket fresh produce is incredibly overpriced, in spite of their advertising claims. Raising your own produce from a seed is about as inexpensive as you can get, even the small plants you buy at the nursery are likely to provide you with better food at a lower cost. With a lot of plants, you can use the seeds from one growing season to provide you with plants for the next in a self-sustaining cycle making you total cost only your time and effort to keep going.

With chemical pesticides and GMO's (Genetically Modified Organisms), from genetically engineered food more and more people have concerns about how our food is produced. Growing your own vegetable patch means you know exactly where your food is from and how it was grown.

Supermarkets tend to concentrate on only the most profitable and easy to sell fruits and vegetable even though there are literally thousands of different varieties of fruit and vegetables to choose from to grow in your garden. For as long as I can remember fruit from the supermarket has always been limited to a few select varieties of apple, for example, rather than the hundreds of traditional kinds that exist. You pick the varieties you like most when you grow your own herbs and produce, and experiment to find new ones you'll rarely see in the supermarket.

The only downside to all of the above is that it takes time and effort. I had to overcome the thought that I might not have the time to spare, and starting small with a few herb plants on my windowsill, my little herb farm

has grown to a multi-mini-acres spread that laid end-to-end would extend almost to the end of my kitchen table. My plants are healthy and still growing. Growing your own produce

can be easier than you think and give you a taste of reconnecting to the earth by growing your own lemons, peppers, apples or corn and like me; the experience just might be enough to hook you into growing your own food for life!
Posted by All that Zazz Blog at 5:12 PM No comments: